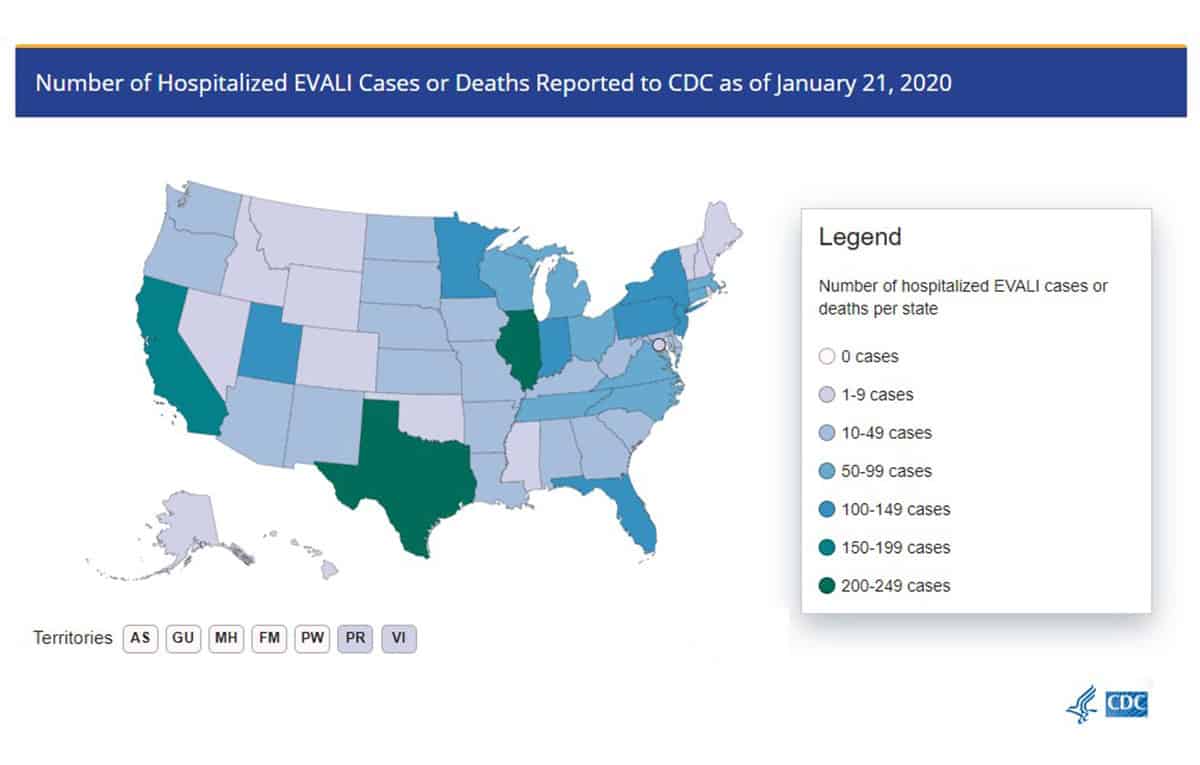 Most Americans believe that nicotine vaporization products are the cause of the recent vapor-induced lung injuries that killed 60 people and hospitalized more than 2,700 more, but only 28 percent of the public understand that illegal, counterfeit THC vapor cartridges, not nicotine products, are responsible for the injuries, according to a recent survey by Morning Consult.

The survey, published last week, measured the beliefs of 2,200 adults in the last week of January. Morning Consult conducted a similar survey in September last year, when the outbreak of lung injury was just reaching its peak. Both surveys show a two percent error rate.

More people now believe that vaping products containing nicotine caused the lung injuries than last fall. In September, 58 percent of respondents mistakenly believed "e-cigarettes like Juul" were responsible for the injuries. In January, that number had risen to 66 percent. And the percentage who correctly blamed THC vaping products dropped from 34 to 28 percent.

What has changed between September and the end of January?

The answer is obvious: more people have heard and believed the wrong messages from the Centers for Disease Control and Prevention, either directly from the CDC or filtered through uncritical media coverage of the agency's findings.

the agency never definitely believed that an additive used in illegal THC cartridges was the only logical cause of lung injury. vitamin e-acetate is a thick, oil-soluble, tasteless and odorless substance that is ideal for diluting cannabis oil. since THC cartridges on the black market are never tested for effectiveness in the laboratory, consumers cannot tell if the products they bought were 90 percent hash oil or 50 percent - or even less. unscrupulous cannabis processors doubled or tripled their money by cutting the oil in the carts they sent to street vendors. it would have been perfect except for one thing: inhaling vaporized vitamin e-acetate can kill you.

Had the CDC decided at that time to issue a bulletin warning all cannabis vapers that they were risking their lives by using illegal THC cartridges, it would have been circulated in every newspaper and on every radio and television show in the country. Word would have spread quickly. Instead, the agency played a game of dancing around the truth, and unsuspecting cannabis oil dealers continued to fall ill and die for months.

The CDC deliberately avoided using the terms actually used by the cannabis oil papers to describe the products that cause the lung injuries, and instead the health authorities misled the public by suggesting in their communications that nicotine patch products were at least partially responsible - and continue to do so.

In fact, the agency has tried to link the term "e-cigarette" to the outbreak from the beginning. In its August 30 health alert to medical professionals, the CDC used the term "e-cigarette" 45 times, even though there is no hard evidence that nicotine products were responsible for even one of the lung injuries.

When CDC officials decided to give lung injuries a unique, catchy name, they chose "e-cigarette or vaping, product use associated lung injury" ("EVALI"). The creators of the cobbled-together term intentionally put "e-cigarette" at the front of the name. The message was clear: e-cigarettes can kill you.

The term "e-cigarette" is understood by all newspapers to refer only to nicotine products. Despite a similar vaporization process, cannabis oil vaporizers and nicotine vaporizers are not interchangeable - nor are the terms used to describe the two types of vapers.

THC oil strips are pre-filled cartridges containing one gram or less of honey-like cannabis oil, and are all referred to as vape-carts, THC cartridges, hash oil carts, vape pens, oil vapes, or a variation of these terms. e-cigarettes are not used to vape cannabis oil.

Effective public health messaging requires the use of language that is understood by the target audience. By using "e-cigarettes" to describe THC products, the CDC demonstrated that it had little concern for the welfare of the cannabis users who were the immediate victims of "EVALI." And by advising all newspapers to stop using "e-cigarettes," the agency also showed that it does not care about the millions of nicotine newspapers are in danger of returning to combustible cigarettes.

The CDC was so far away from the real dangers that representatives and activists of the legal marijuana industry did their best to bypass the federal authorities and warn the cannabis vapers on their own; Leafly, Merry Jane, and the Marijuana Times all published articles warning cannabis oil dealers of the dangers of black market products.

In early October, more than 800 legal cannabis companies and the National Cannabis Industry Association sent a letter to Congress begging for federal cannabis regulation. And in the face of the CDC's inaction, the California section of the advocacy group NORML issued its own warning to the THC Vapers. Even former FDA commissioner Scott Gottlieb has reprimanded the CDC for its imprecise language and ruthless anti-vaping position.

In December, as the CDC slowly withdrew from its warnings that people should avoid all vaping altogether, the agency never clearly identified the danger as adulterated black market TC cars. The CDC never ran a clear, understandable information campaign to reach the most vulnerable people, and now 60 people are dead and hundreds or thousands more will suffer long-term lung damage.

"The initial panic over the exhalation-related illness created a furor, but the updated conclusion barely made the mainstream news," says Morning Consult's Sara Wilson. But the CDC has never actually issued a conclusion or made any serious effort to overtly correct the report.

Rather, the CDC has only tilted its low point of uncertainty a few degrees towards the truth and allowed dribs and drabs to spread, and as recently as January 17, the agency published the advice of its scientists to avoid all products that spread to the public.

"As the investigation continues," they wrote, "the CDC recommends that the best way for individuals to ensure they are not at risk is to abstain from all e-cigarettes or vaping products."

We can only assume - after months of evidence - that the CDC's goal all along was to scare as many people as possible from vaping. The agency used all its resources and all its credibility to convince the vapers to give up e-cigarettes. The CDC was willing to risk the lives of millions of cannabis users to achieve its goal of a nicotine-free society.

The deliberate merging of the two types of vaping products by the CDC has almost certainly resulted in injuries and deaths from THC vaping that would not have occurred if the agency had instead opted for a clear, unambiguous message strategy. In addition, the confusion has caused thousands, or perhaps hundreds of thousands, of nicotine vaporizers to drop their e-cigarettes and return to burnable tobacco.

Worst of all, there is no telling how many of the nation's 34 million smokers will now continue to smoke cigarettes instead of switching to vaping, which is far safer by all objective measures. According to the CDC, half of long-term smokers die prematurely - and many more suffer from serious diseases such as cancer, heart disease and COPD.

The Morning Consult poll found that an incredible 74 percent of Americans now believe e-cigarettes are "just as or more harmful than" smoking cigarettes. That number is up more than 50 percent from June 2018, when the polling firm first asked the question.

Among those people who believe that Vaping is as bad as smoking - or worse - are not only the smokers themselves, but also friends and family members who will now urge and nag their loved ones to avoid Vaping, and they will do so because they believe in the message of the nation's public health advocate: CDC.