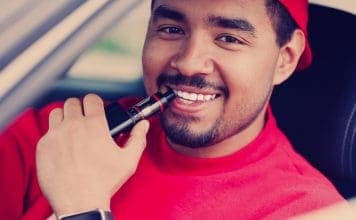 You are here: Home / blog / Steam during work
26 September 2017 by smokeless freedom

Smoking while at work, that's a thing of the past. Definitely since January 1, 2014. For hardened smokers, difficult times began. Some companies set up special smoking rooms, but most companies and authorities had to go outside in the wind and weather to smoke a cigarette or Shagzigarette. And that's still the case in many cases.

No one is really aware of it, but smoking costs the employer a lot of money. Smoking is an expensive business for companies because of the health problems it causes, but also the loss of productivity because of the smoking breaks is considerable. The e-cigarette is something completely different, certainly if it is not banned from the workplace.

The following calculation was made on a manager's website: If one assumes that someone smokes five cigarettes a day, he smokes two of them during the two approved regular smoking breaks of ten minutes. For the other three cigarettes, the smoker goes to the smoking room for a "quickie" that lasts another ten minutes, which costs the employer about 30 minutes a day. This means that for real smokers, over 220 productive working days, a total of five working days a year are lost!

The e-cigarette, on the other hand, costs the employer considerably less money and productivity. First of all, "steaming" is much less unhealthy. This automatically means less absence and less expenditure within the framework of the health insurance law, which is already a thorn in the side of small and medium-sized companies anyway. That makes a difference.

The steam of the E-Liquide is hardly irritating

It also makes a difference that e-smoking in the workplace is not necessarily prohibited from the outset because the e-cigarette in principle does not fall within the scope of the Tobacco Act. There is no tobacco smoke, only harmless and often odourless steam Nevertheless, an e-cigarette is by no means a matter of course during work.

In order to avoid discussions between colleagues at work, e-cigarettes are banned at many companies. Because there is no clear law, e-cigarettes are thrown together with other tobacco products. If e-smoking is allowed at the workplace, there are some tips to ensure that the "steam climate" does not change:

#8211; Do not use E-Liquides with too strong a fragrance.

#8211; Choose an e-cigarette that lets you blow out a modest amount of steam

– Do not blow the steam towards other colleagues

– Please do not steam in the presence of customers or visitors

– Please do not steam when eating in the same room

We also have some recommendations for employers who have banned steaming or are considering it:

#8211; Be aware that pauses in smoking have a negative impact on productivity

#8211; Inhaling E-Liquides has been shown to be less harmful than inhaling tobacco smoke

#8211; The small amount of nicotine in E-Liquides improves the ability to concentrate

So there are a lot of reasons to allow e-smoking during work and it is important to have good agreements that are consistent with the employer's guidelines.